I’m currently in California. This past week was Anime Expo in Los Angeles, and this coming week will be San Diego Comic Con in well, San Diego.

Like previous years, I attend AX mostly to take pictures of cosplays in the South Hall. Not many people realize that the lighting from the windows and structure of the building acts like a diffuser for most of the day. In other words, it makes LA’s harsh light into something fun to work with. But I still use my flash anyway to help fill in and showcase the beautiful colors in the cosplayers. 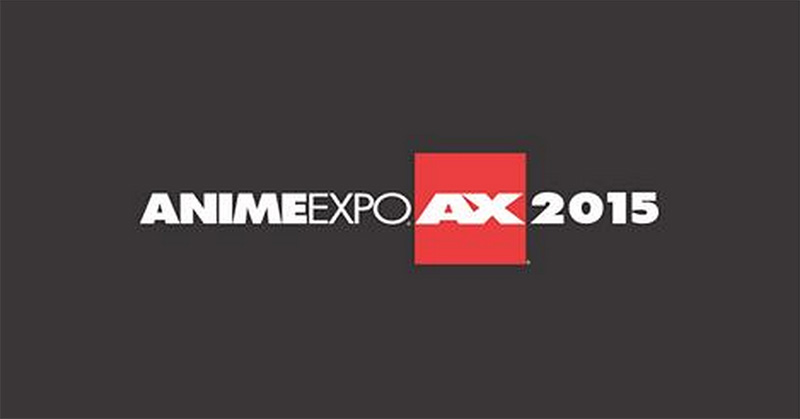 Wednesday is the day many attendees will go pick up their badge. Last year, I blogged about how bad the line was. I personally was in line for 3.5 hours from the evening to night time.

This year, I again went for Day 0 badge pick-up and only had to wait in line for a mere 15 minutes. They really improved the badge pick up system by outsourcing it to Eventbrite. Great job by AX.

I made the mistake of waiting in line for two hours to get tickets for the Anime Music Video Contest. Turns out, the tickets handed out did not reserve seat or section– it was all open seating, first come, first serve! I brought a friend to get a ticket just a bit before the event and he was able to get a ticket without any hassle!

So I did miss out on two hours of time I could have been walking around snapping pics of cosplayers! Never again will I wait in line for AMV tickets.

The AMV event itself was good, but the show ran 30-45 minutes late and was really really long event. I ended up falling asleep after the third category.

Going to AX each year is a reminder of how much new anime is out there and how much I don’t know anime anymore. I’m somewhat old school, in that I know Dragonball Z, Ranma 1/2, Seint Seiya, One Piece etc.– the older stuff. 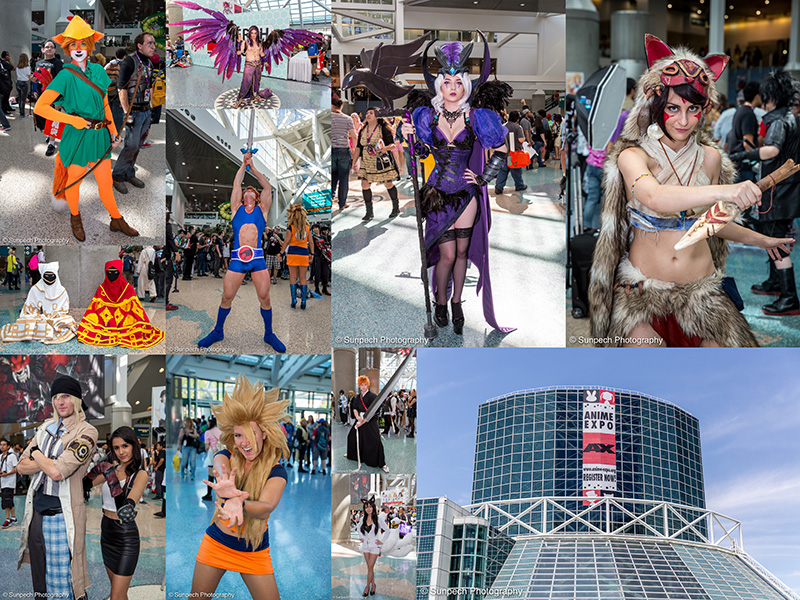 This was the Friday, which turned out to be the best day for me in terms of taking pictures of cosplayers. Attendance was high and I was lucky enough to be in the right place at the right time to snap a pic of Jessica Nigri in South Hall. 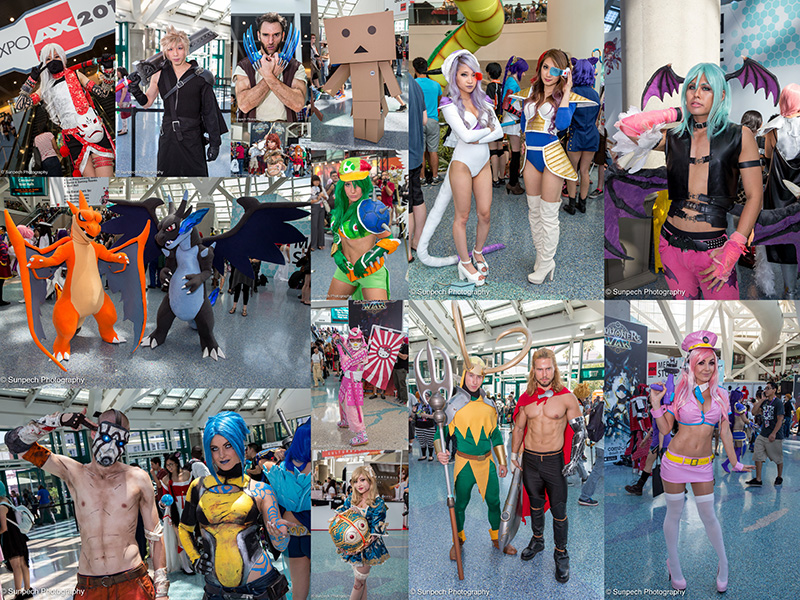 This was actually the 4th of July, Independence day for the United States. The attendance was good, but didn’t seem as much as Friday. Still a good day to take photographs of cosplayers, but towards the end of the convention, many had already left I assume to prepare for July 4th parties etc. 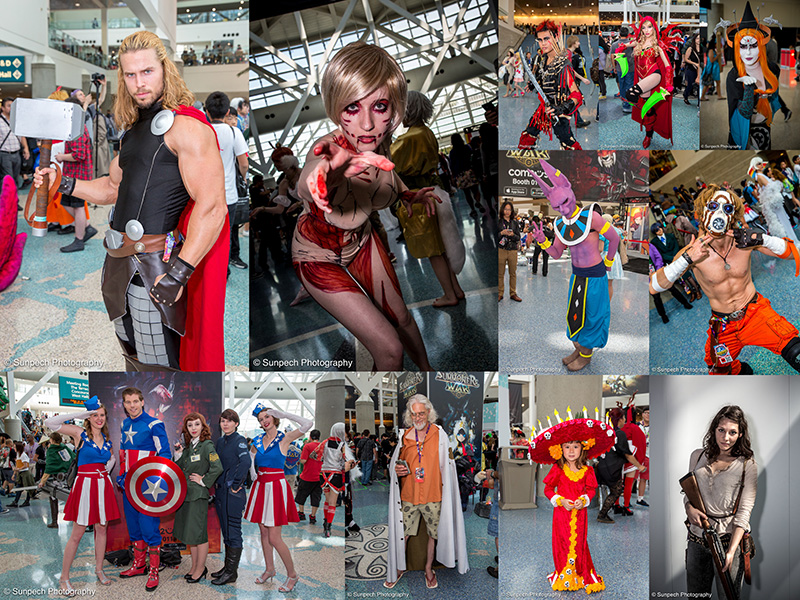 The last day I usually take it easy. Like last year, I went around with just a 50mm prime lens and took pictures, mostly portrait style with bokeh. 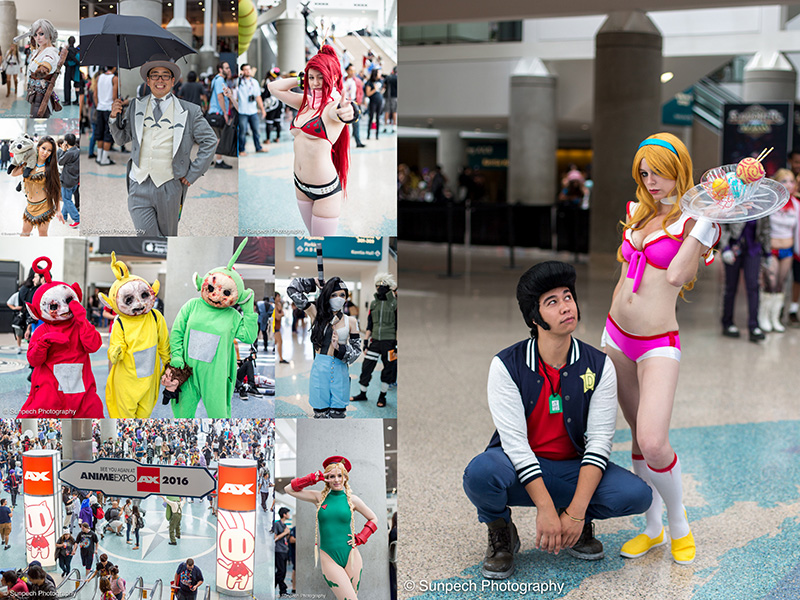 Anime Expo is my favorite convention to attend to take pictures at. Year after year, it is a fantastic event that hosts so many great cosplayers and fans alike. It gets bigger every year and I often wonder if the Los Angeles Convention Center can handle all the traffic. AX staff proved they can handle the lines and badge pick up, but I still find the foot traffic to be borderline uncomfortable. There are more cosplayers, photographers, and videographers every year. There are selfie sticks, light stands, and other objects that stick out in all directions. It’s becoming a more potentially dangerous event where people can get injured.

I’d like to see AX take more precautions on some of these things before there is a terrible accident or incident. The security staff I must say is already doing a wonderful job, but there’s no way for them to be everywhere in a crowd of 90,500 people. I personally was almost got hit by a videographer swinging his camera gear around for a shot.

I’m also nitpicking here. There’s always room for improvements. Overall, it’s a fantastic experience whether you like anime, cosplay, panels, shows, etc. Very much worth going to, especially if you live in California.