This year’s Anime Expo (AX) has come and gone now. Just like the previous years, I went again to take photos of the cosplayers. For me, AX, has the best collective gatherings of cosplayers I’ve ever come across– although one day I’d like to check out DragonCon, which I hear is amazing.

If you just want to see my sets of pictures see below:

I’m also on Instagram (again). I tend to post pictures there firstHere are some of my pictures and thoughts by day.

I always try to pick up my tickets on Day 0 since it’s an easier, aka shorter line than Day 1. However, they had some problems with the registrations and printing this year. This caused major delays with AX responding that they would extend pre-registration hours until midnight. Despite hearing about these delays, my friends and I decided to go anyways since Day 1 would probably be even worse.

I got to the Los Angeles Convention Center (LACC) around 7:20pm. On the way to the line, I bumped into another friend that just got his badge and was walking back. He had been in line since 9am. That’s right, he was in line for 10 hours. TEN HOURS. 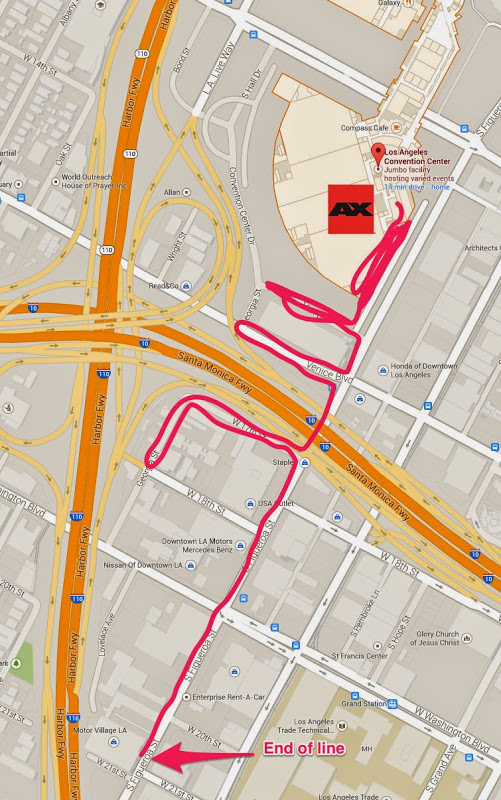 I tweeted about how far the line was– several blocks long! Walking to the end of the line was a disheartening experience. Every step I took was a step I knew I was going to retake in the opposite direction. In the end, we were in line for about 3.5 hours. Surprisingly, they processed 25,000 badges on Day 0.

Anime Expo from the front of the building. 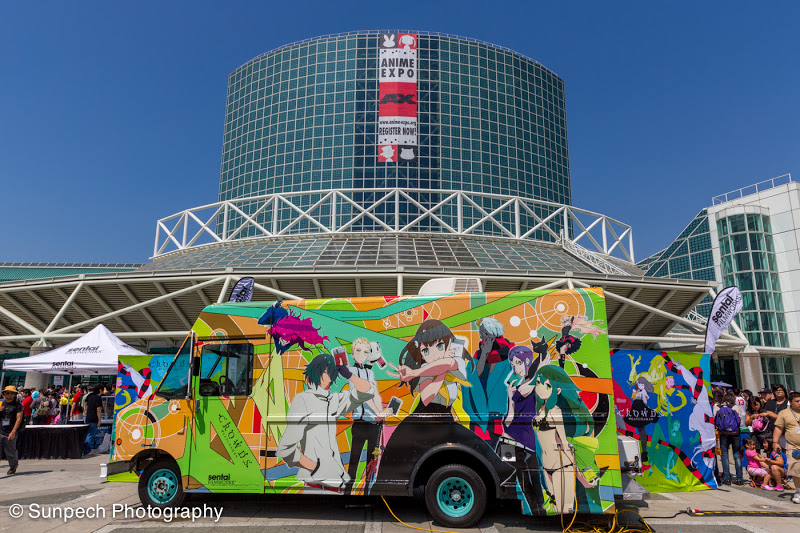 The huge line waiting for the exhibit hall to open at noon. 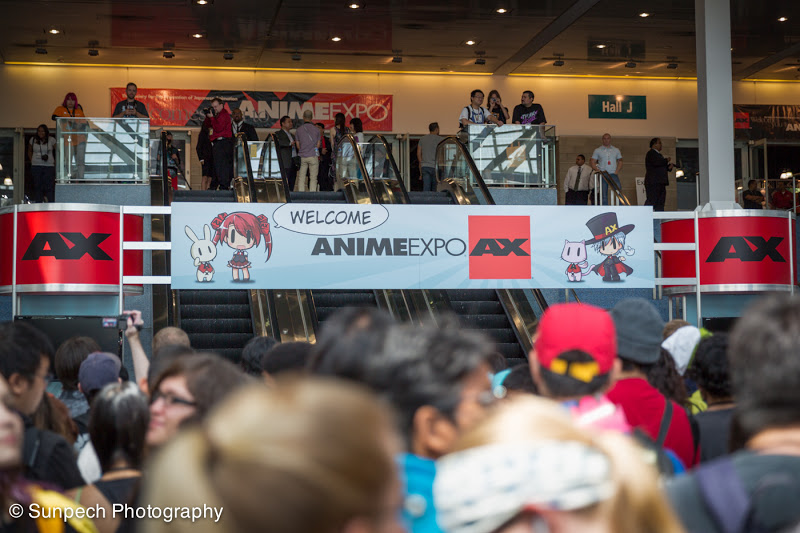 The mad rush of everyone going up the escalators once the exhibit hall opened. 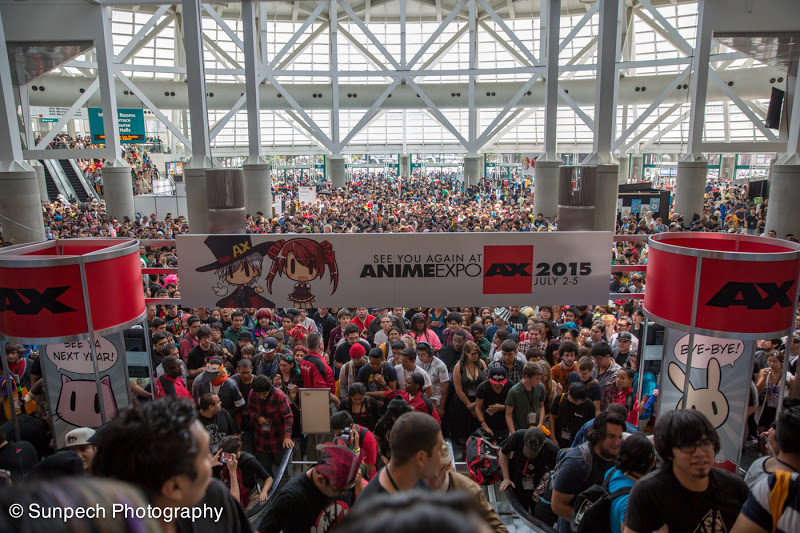 The Marvel and DC Universe gatherings merged into one big one. 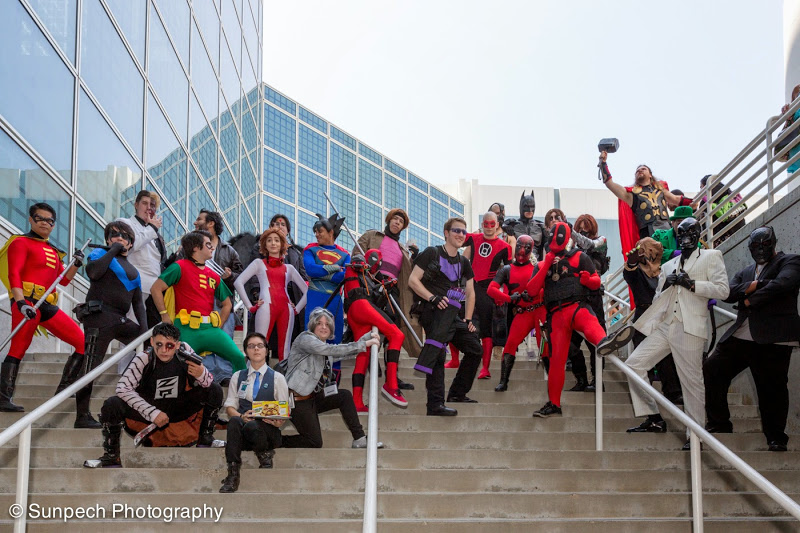 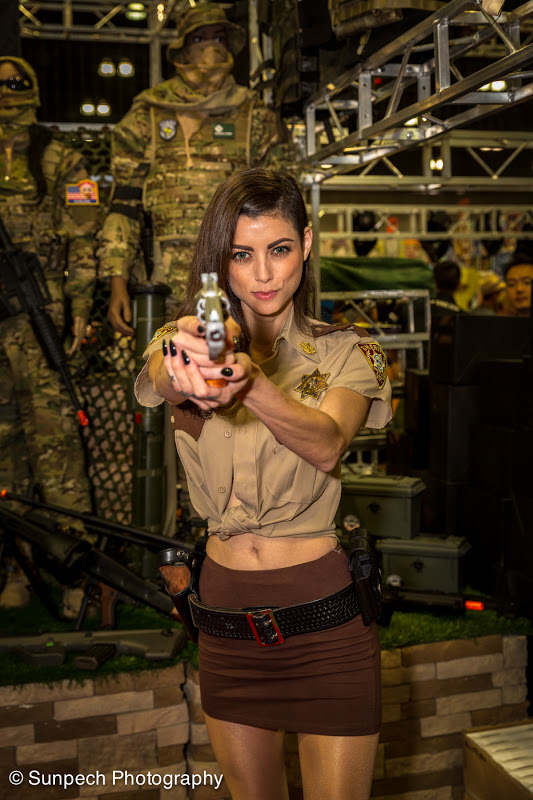 I actually spent almost two hours at the “Cosplay in America” @ Anime Expo 2014 meetup. I’m also a backer of the Kickstarter project: ‘Cosplay in America’ book. This was actually a relaxing time spent sitting down and talking with other fans of cosplay.

Ejen (right) meeting fans at the Cosplay in America meetup.

At this little meetup, I learned the difference between gender bender and crossplay.

Gender bender is when a cosplayer takes the character of the opposite sex, and portrays it as their own. An example is a male that takes a female character’s costume, but portrays it in a male outfit.

Lonstermash cosplaying Wolverine. I enjoy photographing this guy, he makes it so easy for the photographer. 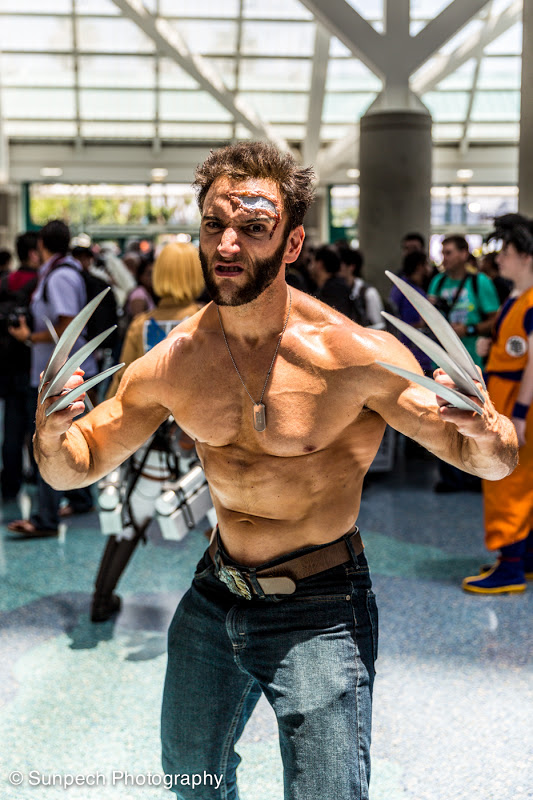 Loki Hates You– the best Loki cosplayer I’ve ever seen. 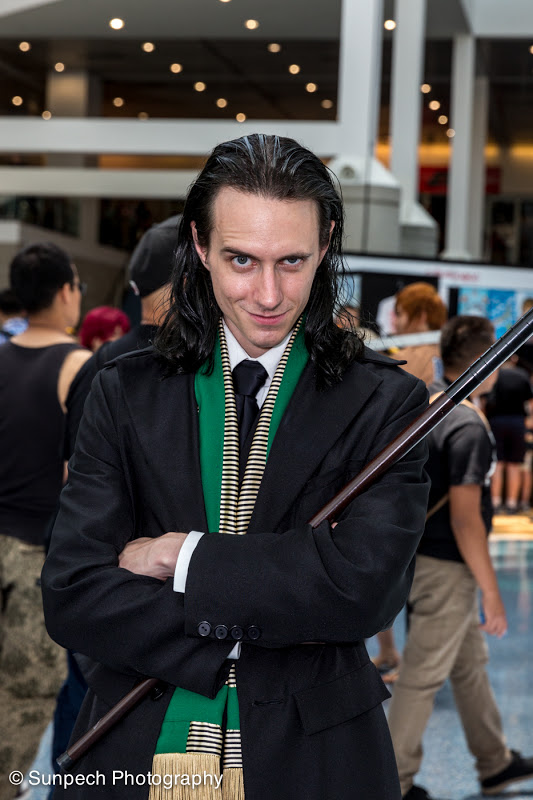 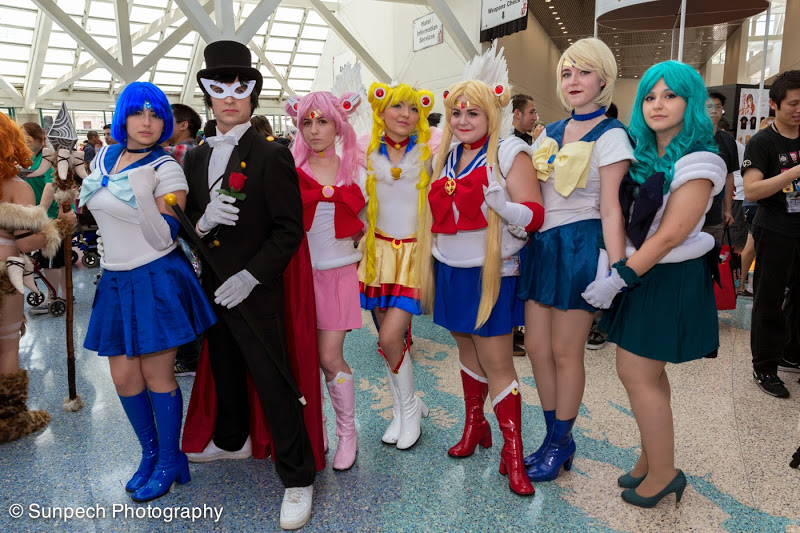 Katarina from League of Legends 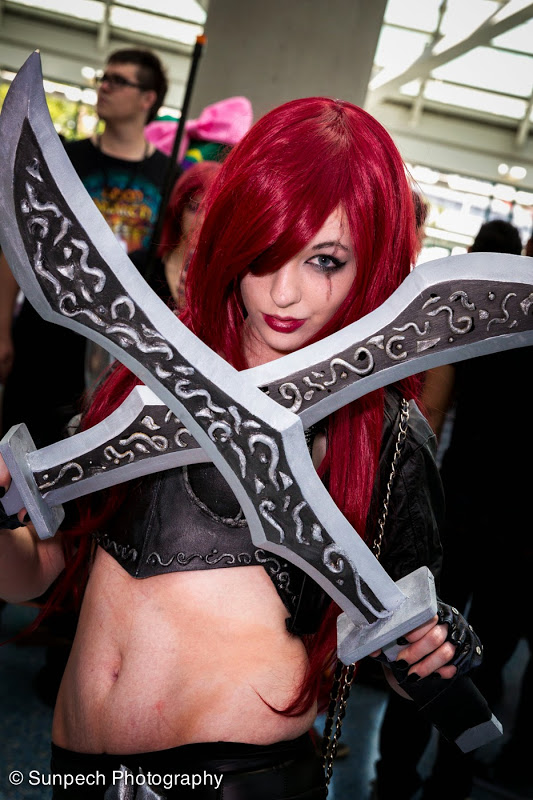 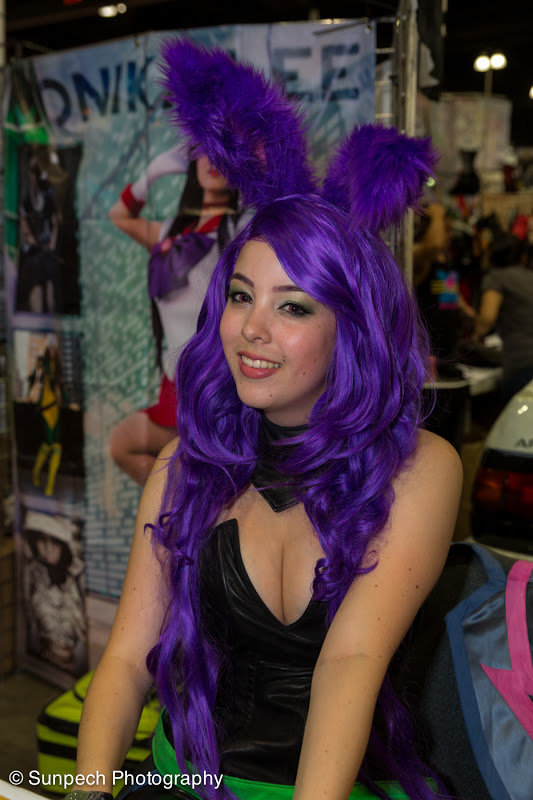 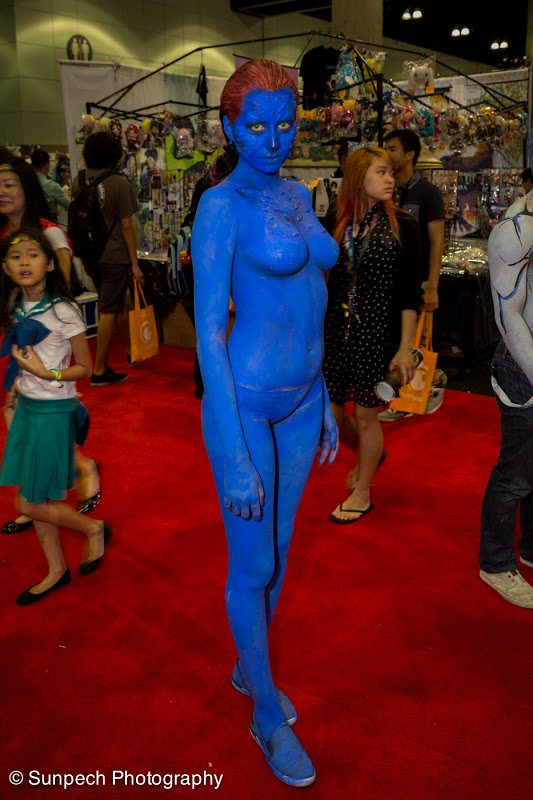 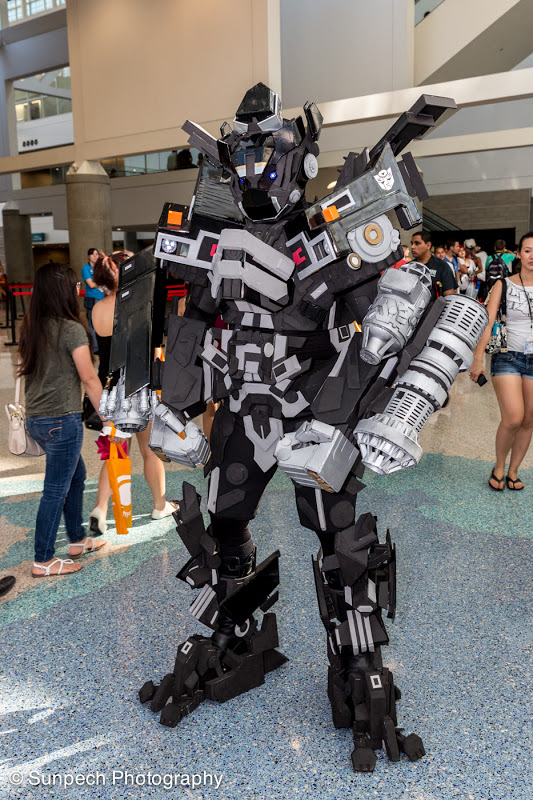 The third day, Saturday, was easily the biggest and most crowded day. It was uncomfortable walking from one side of the convention to the other as you were shoulder to shoulder with everyone else. 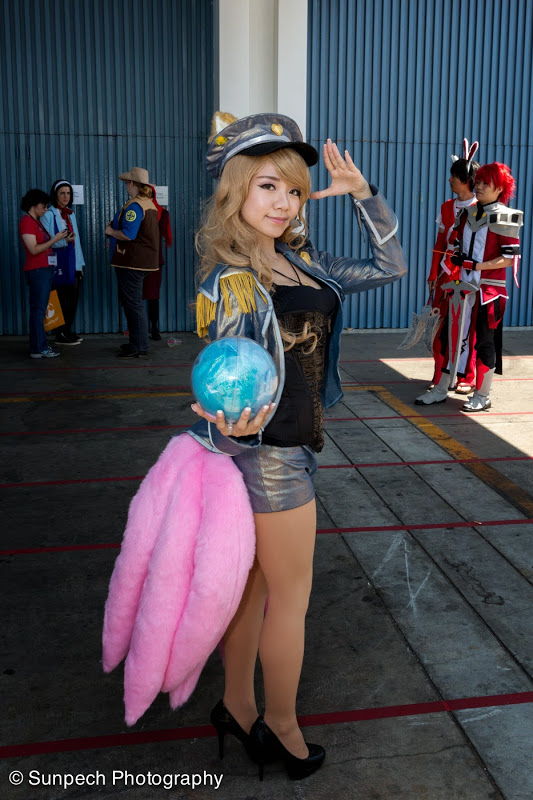 The League of Legends cosplay gathering 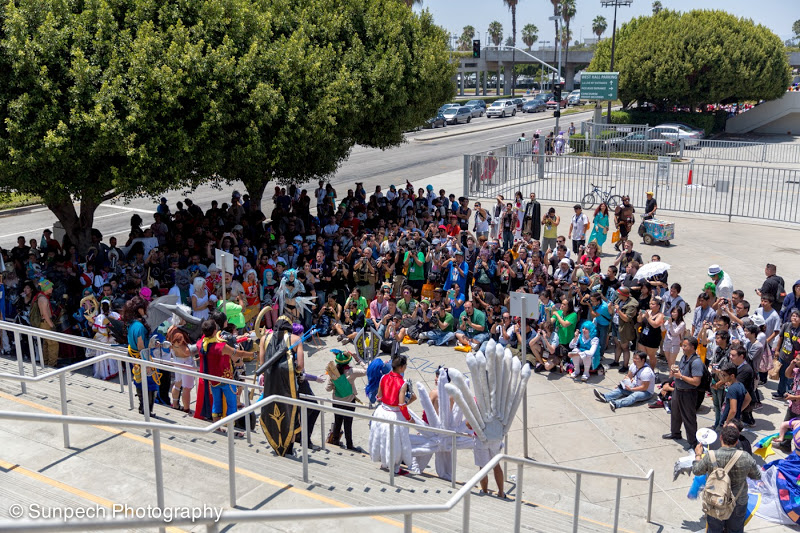 Gender bent Luffy from One Piece: 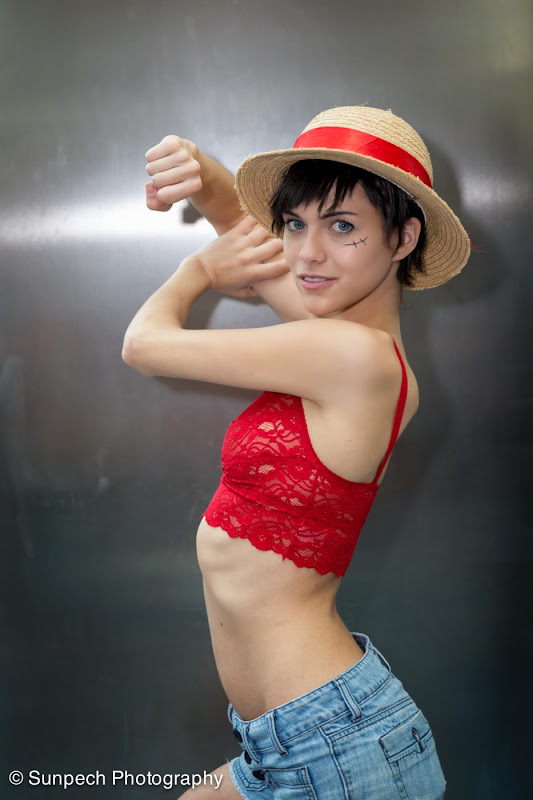 Bumblebee and Optimus Prime from Transformers 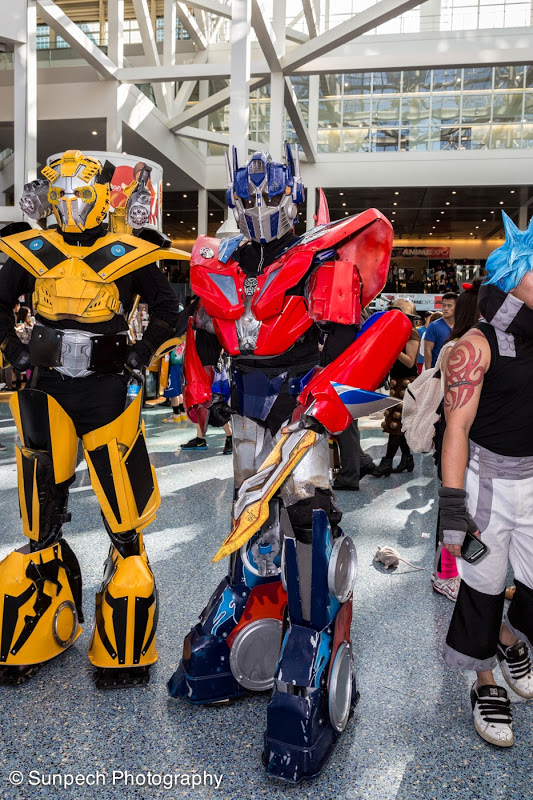 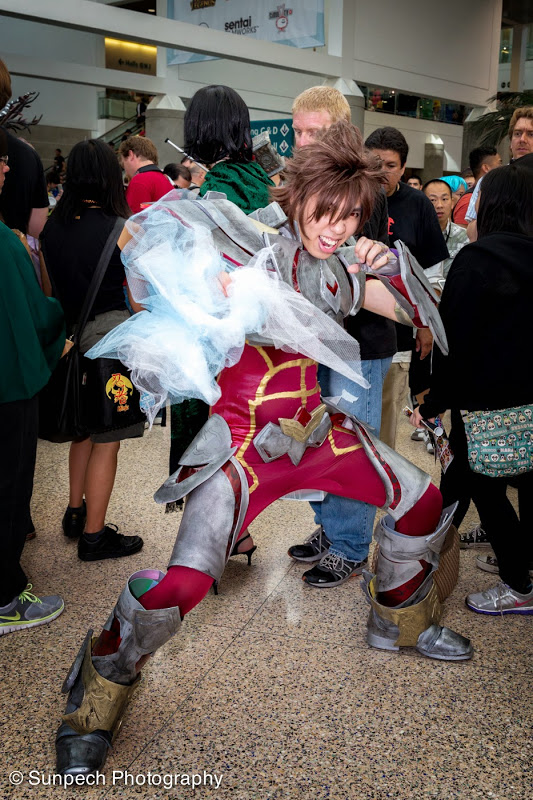 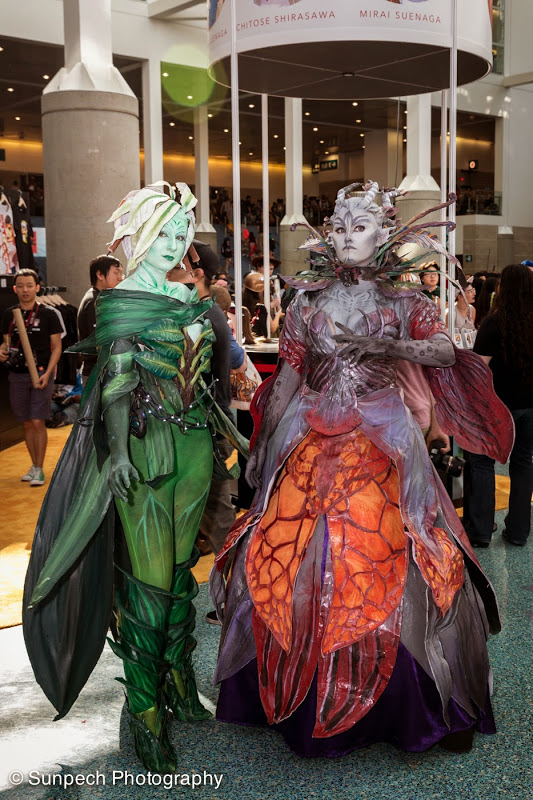 The last day of the con I only wanted to go for a bit since my friends only wanted to do last minute shopping. I didn’t bother to attach a flash to my camera and just shot casually. In total, I was only there for a little over an hour. 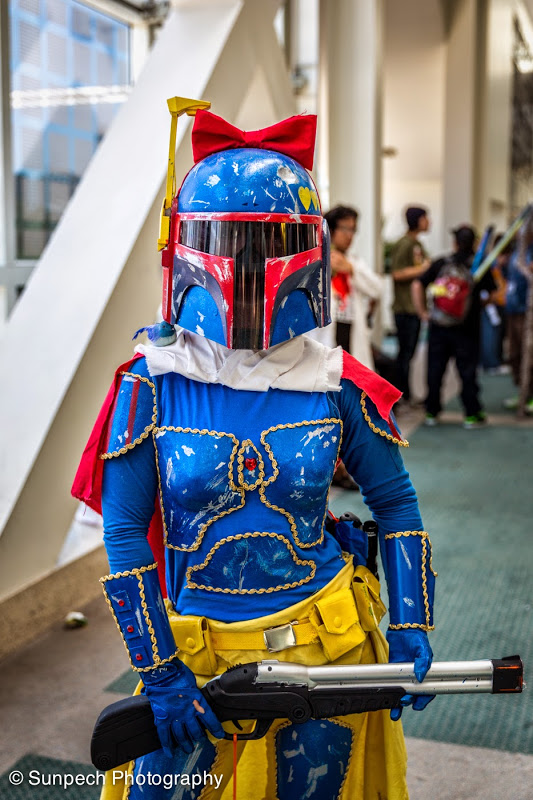 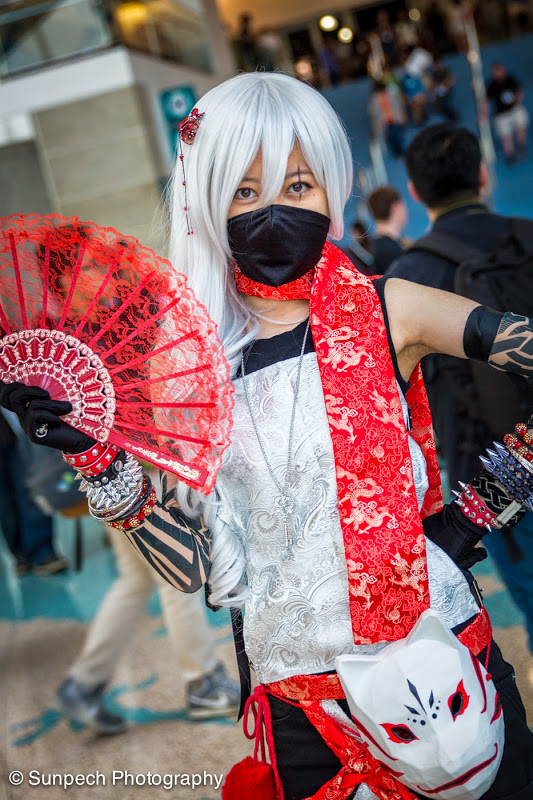 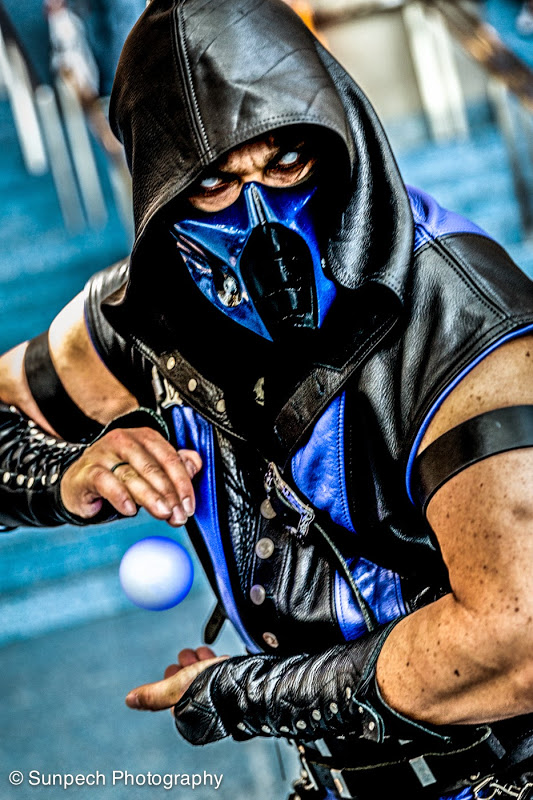 *I hope AX staff are open to the idea of distributing tickets in other ways for next year. The two main ones are:

AX is just getting more popular each year and the lines are longer than ever. This year was also very hot. AX staff were distributing water for those in line– many of those in line were in cosplay gear too!

Another thing they should consider is moving the convention to another bigger place. LACC is nice and all, but it’s got some major bottlenecks going from one hall to the next. That and anime fans love to sit around, talk, wait, and cosplay everywhere. It’s a fire hazard to have so many tightly packed areas.

I understand that there are concerns about counterfeit badges if they are mailed out. I guess getting the badges a few days early by mail gives more time for those who want to create/sell fake badges?

Throughout the con I overheard many fans complain the long lines, lack of communications or miscommunications, and general disorganization of AX staff. Although I feel for the con-goers who suffered in the heat in line, I can’t help but think about how much we paid for tickets. For my 4-day pass, I paid $45 many months ago. It think it went up to $70 after the pre-sale. Either of these ticket prices are pretty cheap compared to other cons.

Anime Expo is a inexpensive, best-bang-for-your-buck con I’ve come across. They have notable guests, panels, booths, exhibitors, screenings, etc… for between $10-20 per day. I’ve said this before too, but in general their handling of the lines is actually pretty good considering many of them are volunteers. I’ve been to other conventions where the line handling isn’t even half as good– and this isn’t even considering how much bigger of a con AX is to other smaller ones.

I was interviewed in a podcast at AX this year and I briefly made a comment about cosplay gatherings being rather poor or not as good as cosplayers in the main hall. I feel what I said could be taken out of context and wanted to take the time to explain my thoughts on that.

What I meant is that cosplay gatherings can indeed be a mess as some people don’t even show up. Conversely, they can be incredibly large too. For a photographer, it’s difficult to get quality shots at these gatherings. The photographer may not be in the best position, or even many cosplayers cannot get in the best poses either. Cosplayers and photographers are tripping over each other at cosplay gatherings and may not be worth the time and trouble to attend. The main hall is also a mess, but a more organized mess since the subject(s) are more limited to maybe 1-6 cosplayers.

Anime Expo, every year, is a reminder to me of how much anime is out there and how much I have not watched. Last year it introduced me to Attack on Titan. This year, it’s Kill la Kill and Sword Art Online.

The next con I will attend is none other than San Diego Comic Con in San Diego. Just a few weeks away!