Last weekend was C2E2 in Chicago. I went all three days this year and spent most of the time in the main stage room for panels. I was barely on the show floor taking cosplayer’s photos, but I think I still got a decent amount.

The show floor seems to have expanded the autograph/photo-op area, as well as more space for cosplay and eating/chillaxing. I think it’s making great decision in creating a better experience for con goers than just a place to buy stuff.

Something that’s going on right now is the Coronavirus Diseseas (COVID-19). The McCormick Place convention center had hand sanitizer everywhere, as they normally do. One thing I just don’t get about bathrooms in general is that after you wash your hands, often the doors open inwards, so you would have to open the door with your hands! I wish there was a better way.

If you want to skip reading this blog post and just check out the photos I took, here are the links:

For my photography, I didn’t use my flash at all this year. I kept it simple with my Sony 55mm prime and Canon 70-200mm telephoto. I used the Sigma MC-11 adapter on my Canon telephoto, which for the most part was pretty good. I did notice that it struggled for autofocus when in portrait mode (vertical) at full length (150-200mm). So to counter this I would just shoot landscape (horizontal), which autofocus was fine– still not as fast as on a Canon body, but still very good.

I took a record 3,680 photos this year across all three days. I actually filled my 64GB SD card and had to wipe my backup card and swipe it into the main slot so I could continue taking photos during the cosplay competition.

The cosplay again was amazing this year. Generally on Saturday, many of the cosplayers that are competing in the Crown Championship will also walk the floor for a bit, before eventually taking to the stage for competition later on at night. I’m amazed that some of them can be in cosplay all day like that!

I didn’t attend any group cosplay meeting this year, as I didn’t want to take group shots. It’s just diffcult to do on a prime lens.

This year they skipped the ticketing/wristband process and just had everyone line up, first-come-first-serve. So in general, you would have to start lining up about one hour early to get in. If you are in a panel before the cosplay contest, the main stage, they do clear out the room. But once you’re in, they let you roam to take photos on the side, or even the front– which I love about C2E2. Same pretty much goes for the panels.

One thing I’ve noticed is that C2E2 didn’t have contestants on their website, so it took some time to find and credit cosplayers I photographed. So I put together a Google spreadsheet here:

It has the category, contestant name, cosplay character, source, region, and results. 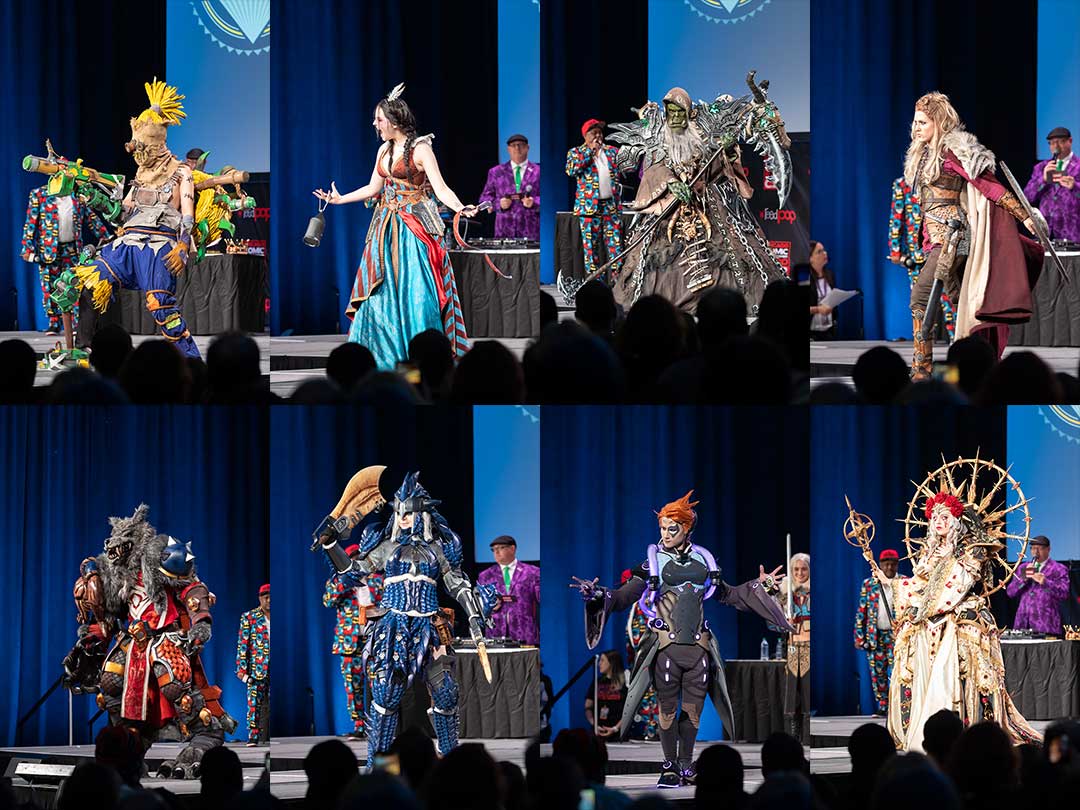 I love going to the panels at C2E2. I think it may be the main reason I attend now, possibly over cosplay. I like how they give you access to photograph the guests on stage and spend time. The general formula is about 15-20 minutes of moderator warm up questions, then the rest of the time is for fans question and answer session. 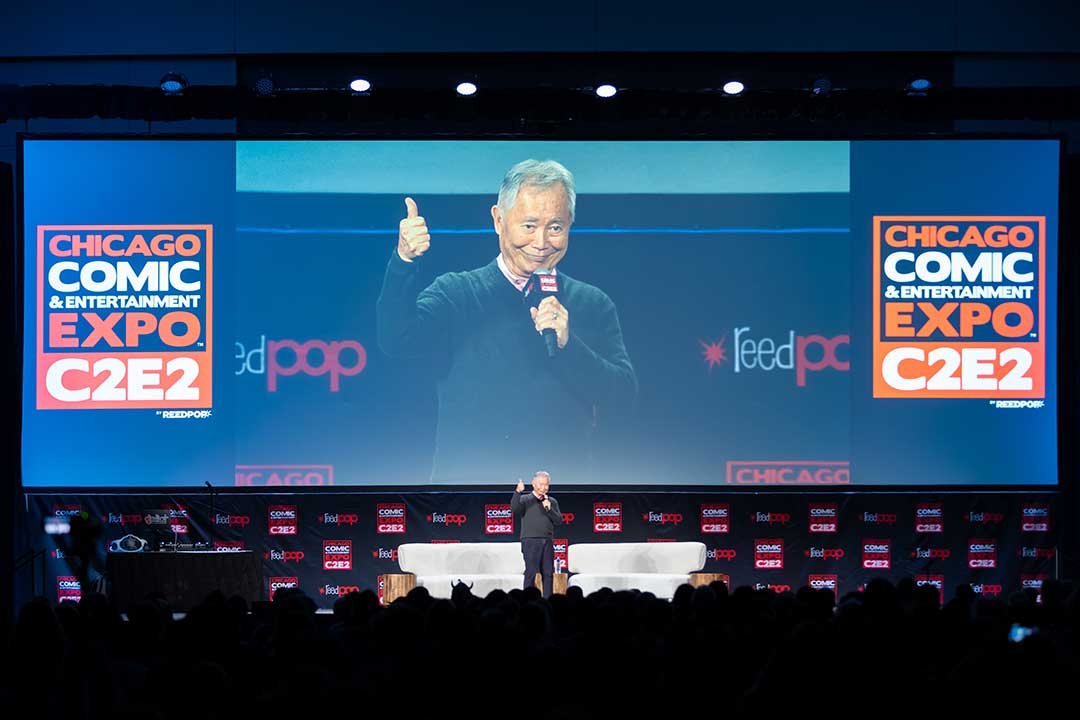 George Takei is such an amazing person to listen to on stage. He has so many stories and experiences to share from in career and personal life. He covered everything from Star Trek, his fellow actors, being a closeted actor in Hollywood, finally coming out to help others, to being on the Howard Stern podcast. One of my favorite stories is how his name was often misread on set– George “Take 1” Takei. 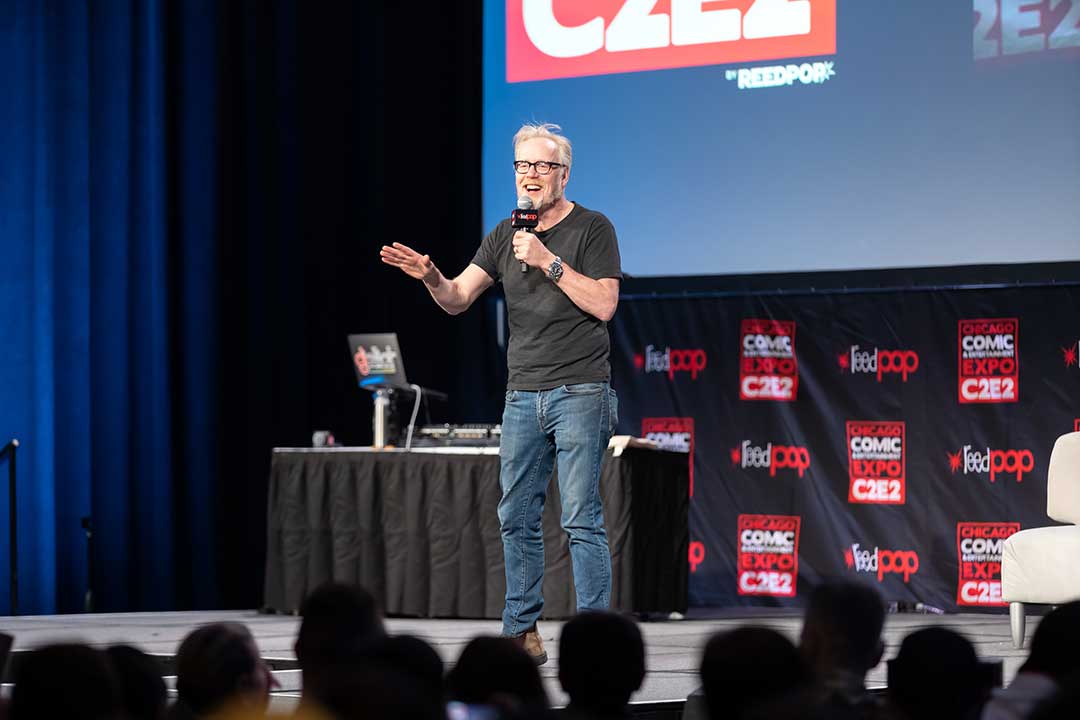 Adama Savage is a favorite at comic conventions for a reason. He loves to attend not only as a guest speaker, but also loves to cosplay on the show floor! Like Takei, he doesn’t need a moderator, he can just hop on stage and talk directly to the audience and do Q&As. Like all panels he’s a part of, there’s never enough time to get to all fan questions. 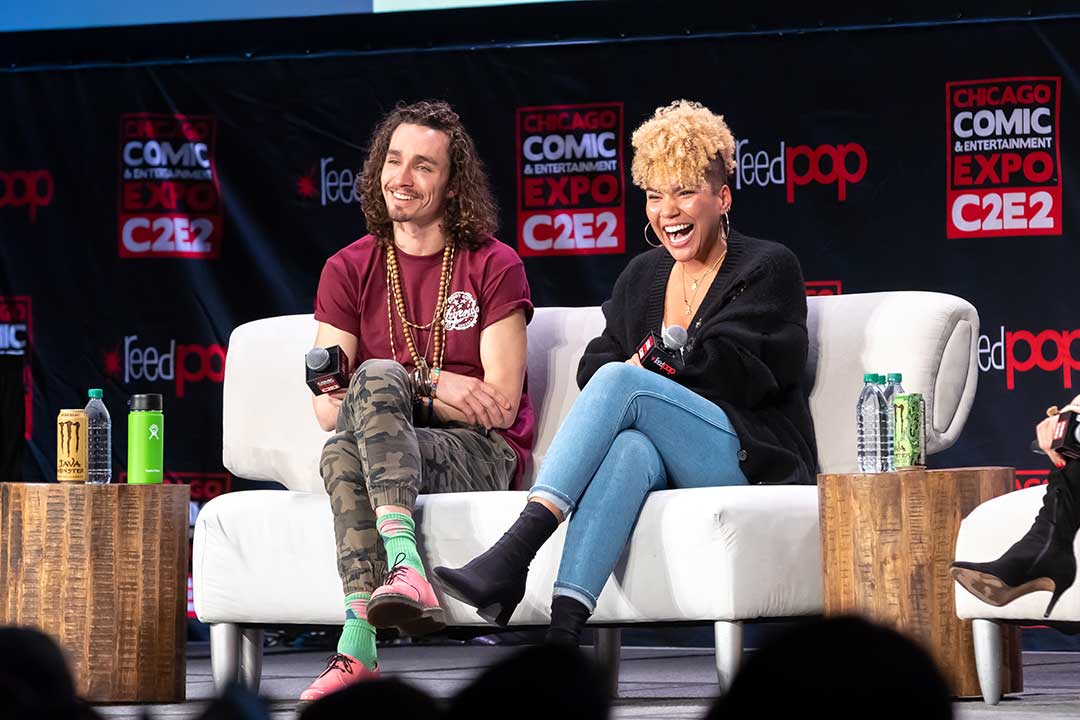 I’m a fan of Netflix’s Umbrella Academy. I’m also a fan of Robert Sheehan. He’s great on the show, but also check out Misfits, which is also a superhero show that has Iwan Rheon and Nathalie Emmanuel from Game of Thrones! Emmy Raver-Lampman is amazing too, he smile just lights up the room! 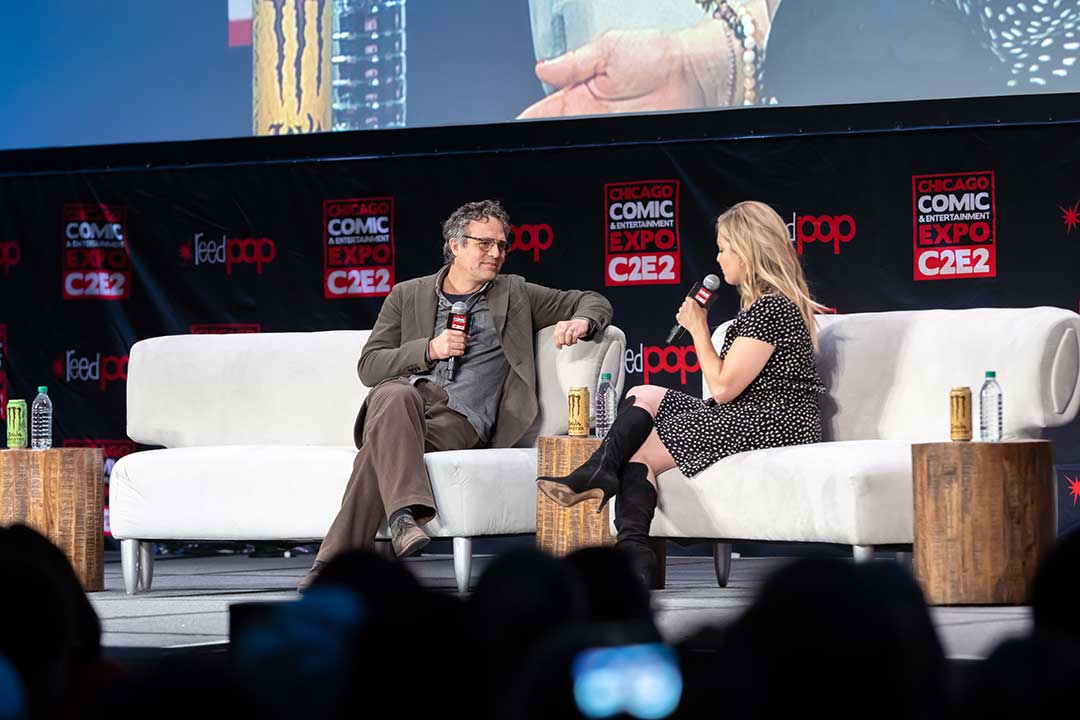 The Mark Ruffalo was early on Sunday morning, 10am. Yet fans lined up early to get into the room that filled to capacity almost right away. 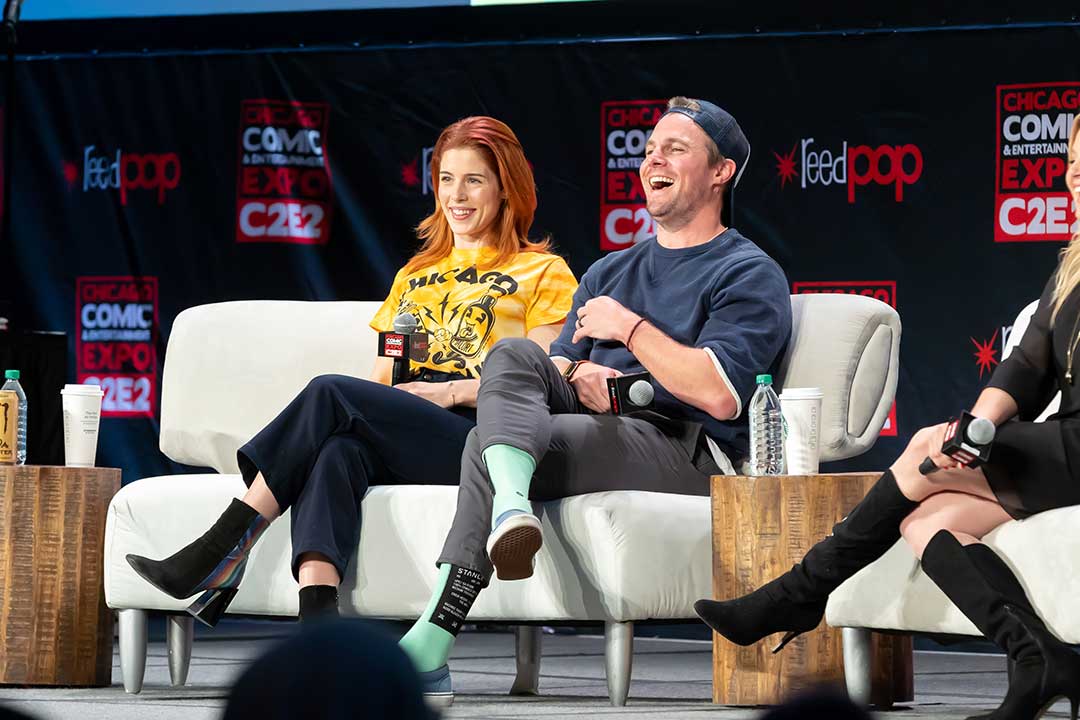 I wasn’t a regular viewer of the CW’s Arrow show, but I do enjoy seeing Stephen Amell at conventions. Amell and Emily Bett Rickards have such chemistry on stage, you can really tell they are close friends. The panel was really fun and everyone was having a good time. I recall one young fan having comments to say about Amell’s choice in socks. 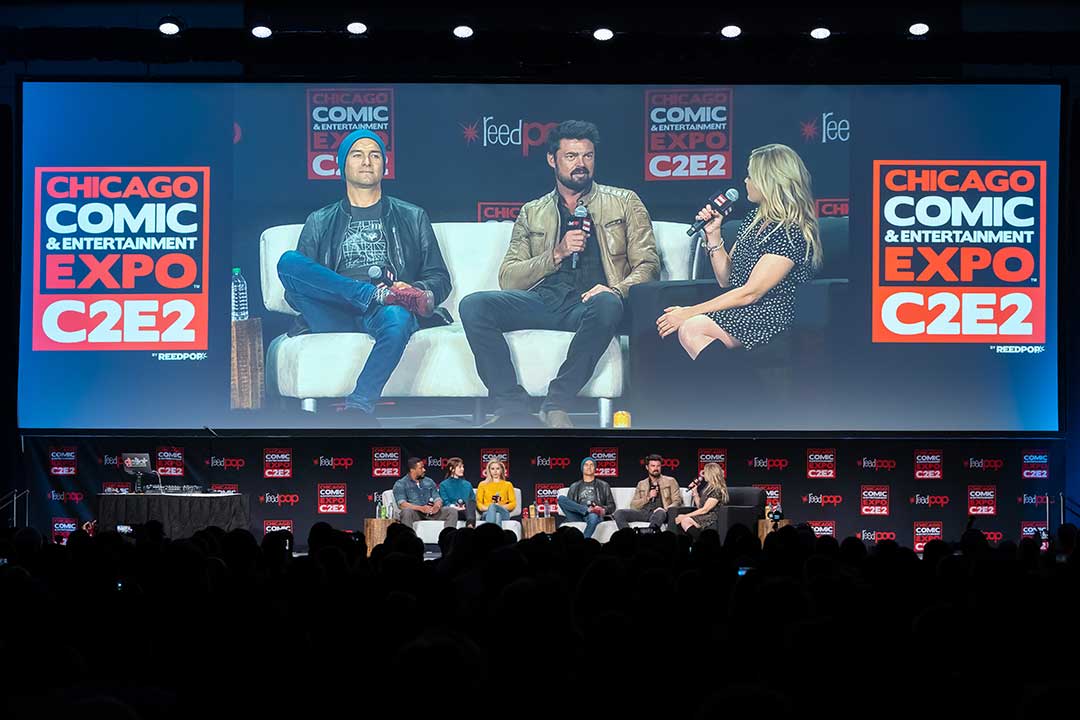 I’m a fan of Amazon’s The Boys TV show. I haven’t read the comics, yet. On stage was Karl Urban, Antony Starr, Erin Moriarty, Dominique McElligott, and Laz Alonso. These guys have so many stories and pranks to share from on set. This was on of my favorite panels I attended at C2E2. And I have to say that Atony Starr the actor is so different from the Homelander character we see on the show!

If you are a Chicagoan or live in the midwest, C2E2 is a fantastic comic convention to attend. The cosplay, show floor, panels, guests are far above the average convention– and year after year, they keep improving. It’s not a huge convention like New York or San Diego Comic Con, but that’s a good thing. It’s more comforable to attend without the stress of crowds or crazy lines.

One last tip. If you are an out of towner, stay at the Marriott Marquis instead of the Hyatt Regency. The former is more quiet place to stay, the latter an absolute zoo outside of the convention hours. Up to you in what kind of experience you want to have.