I went in with low expectations, overall, the movie was just okay. I was entertained, but not blown away by anything. If you are expecting what you saw the trailers, you are probably going to be disappointed. It’s worth a watch if you want to keep up with the DC movie universe.

Disclaimer: I watched the movie for free with my T-Mobile Tuesday App, which gave me free tickets. If I had spent money, I might be slightly more disappointed.

Everything below is my spoiler filled review of the movie.

Viola Davis killed it as Amanda Waller. She was absolutely ruthless and I swear the temperature of the theater dropped a few degrees whenever she was on screen.

Cara Delevingne looks amazing as the Enchantress. I’ve always been fascinated with creepy witch-based characters in super hero movies– the first of which was Scarlett Witch in Avengers: Age of Ultron when she stood behind Tony Stark at the beginning of the movie. Throughout the movie I wanted to see more of her and I loved the dark aura they put on her. I wasn’t a fan of her dance while she was channeling her energy to build the world ending contraption.

The scene where Dr. Moone summons Enchantress was one of my favorites. The hand flip was both creepy and amazing!

Joker and Harley Quinn were just okay. It’s hard for Jared Leto to follow Heath Ledger’s rendition in Christopher Nolan’s Batman movies. To add to that, it’s also hard for the crazy duo to follow the voice actings of Mark Hamill and Tara Strong for Joker/Quinn. Although I must say that Margot Robbie really does look like Harley, but there could be another movie to explore their toxic crazy relationship. It’s got potential to be great though.

Diablo was a nice touch and had a good final battle. I think it would have been better if as the demon, he sacrificed himself to take out the Enchantress' brother rather than the underground explosive device. The demon versus monster should have been played up more. I just didn’t buy into him believing that his Suicide Squad was his family– perhaps there was more to it in another edit/version of the film?

From the numerous trailers that came out, my impression was that they were just going to have fun where bad guys would be tasked to do things the government couldn’t ask of anyone else– yet the movie toned it down, made the worst of the worse likable, relatable, and heroic. A team of super villains should contrast deeply with a team of heroes with how they do things right? Not in this movie.

You can really tell which actors the movie editor(s) had obligations to put the spotlight on more than others. Half of the movie’s dialogue belongs to Will Smith. Often times I forgot that Killer Croc, Captain Boomerang, Katana, and Slipknot were even in the team– well the last for obvious reasons. I think Harley Quinn’s butt had more screen time than Killer Croc. Katana’s blade wasn’t even utilized to capture any souls– it may as well have just been a regular sword!

I liked the short character intro they did at the beginning, but the constant flashbacks of Joker/Harley was annoying and ruined the pace of the movie. As much as I enjoy the Joker, there should have been less of him, and more about the squad.

The scene where Joker deactivates the explosive tracker in Harley’s neck and rescues her was a complete waste. Waller is captured anyway and Harley rejoins the team afterwards. It served little purpose.

Ocean’s Eleven is an example of how to handle a big cast and deliver a great well paced story where everyone has their moment and backstory told. 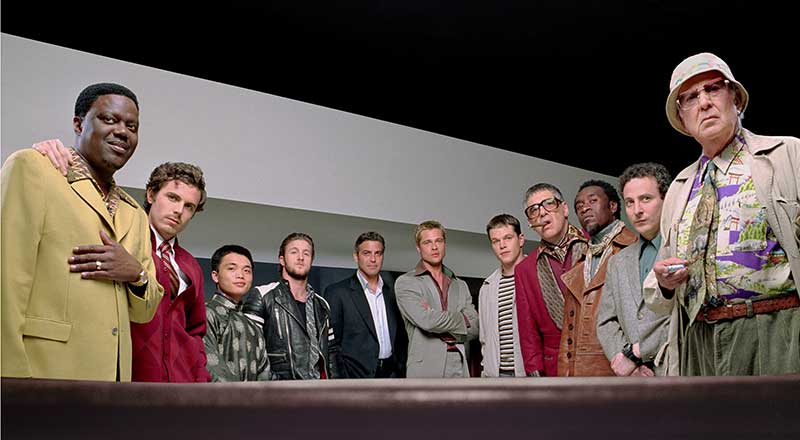 Suicide Squad shouldn’t have to deal with end-of-the-world type threats. The team dynamics would function better as a heist movie where so many things go wrong and they have to adapt. Anything where the focus is on action and moving the story along instead of slow breaks for flashbacks. The movie has a simple plot, but it’s filled with lines from Deadshot, and an abundance of Joker/Harley flashbacks.

In the comics, Suicide Squad is made up of B-grade villains that Batman could fight by himself. They are really out of their league when it comes to fighting some true magic wielding meta villains.

Suicide Squad is a movie that has problems. The overall story was wrong, the editing was messy, the pacing was slow and didn’t match the advertised trailers, and the dialogue was horrendous at times. But I still gave it an okay instead of a thumbs down– here’s why: Suicide Squad is the kind of movie studios should be taking chances on. Mistakes were made, and they should learn from them.

If a sequel is green lit, I’d like to see them go with a full R-rating and create a story that is within the scope of the character’s abilities. It should be pure chaos, action, and violence.

Here are some of my favorite youTubers with their spoiler-y reviews of the movie.