This is my spoiler filled review for the latest X-Men movie. I also talk about all the previous X-Men movies. It won’t be pretty.

I did not care for X-Men: Apocalypse.

I went in with low expectations and came out disappointed with what I saw. This is coming from someone who read some of the X-Men comics as well as watched the 1990s animated TV series.

The problem is it’s a movie where things happen, has characters from the X-Men universe, but in name only. It’s a bad description because it’s a bad movie. The movie is as hollow as the characters presented. I got sick of seeing flashbacks of Charles Xavier and Erik Lehnsherr’s friendship– it could only be worse if it were in montage.

Bryan Singer seems to ground his super heroes in reality and avoids anything over-the-top or similar to the comics. The action sequences are all rather plain by today’s standards. In the final battle, the heroes were launching a stream of energy and projectiles at Apocalypse for ten minutes. It’s not exciting to see someone stand in place with their arms up with the computer graphics (CG) doing most of the work.

The appearance of Wolverine as Weapon X is a gimmick. His appearance wasn’t a surprise as it was shown in the trailer. It’s used to help boost interest with a beloved character, but isn’t a main character in the movie. He was a misused plot device to get the inexperienced mutants out of a heavily guarded base. If they can’t fight against human guards, how are they supposed to fight against Apocalypse and his Four Horsemen later? It should have been an opportunity to show them work together to overcome obstacles rather than to easily stumble upon Weapon X.

The scene where a young Jean Grey, played by Sophie Turner, helped Wolverine remove the head gear was just awkward. The following scene, when he runs off into the woods was also strange. It’s as if they added that scene very last minute.

I’m thankful to Hugh Jackman taking on the challenge of playing Wolverine for all these years, but I’d like to see him hang it up and pass the mantel on to someone else– or better yet, retire the character for a few years and give a chance for other mutants to shine.

Mystique, played by Jennifer Lawrence, is not a mutant that is ever front and center in the comics– her mutant power is attuned for behind the scenes and in espionage. Because of her rise to fame in Hollywood, she’s given a lead role in the last two X-Men films. Her lines in the movie are poorly written and she seeminlgy wasn’t interested in reprising the role and or having the makeup process done to her as she was in human form for most of the movie.

Apocalypse was also very disappointing. Oscar Isaac is an amazing actor and this role and script was beneath his talent. The costume was not menacing and his human size was rather comical. Everything that made Apocalypse an awesome villain in the comics or TV series was left out. He’s immortal, has many undefined powers, and is augmented by celestial technologies. The latter I thought could have been incorporated into the movie to show just how powerful he was.

Cyclops has always been a big fail in the movies. He the X-Men’s leader, a straight arrow, and borderline difficult to have fun with, but he always keeps the team in check. Yet in the movies, he always fades into the background behind Wolverine. His love for Jean Grey is monumentally important, especially when it comes to the Phoenix stories, yet it’s never been properly portrayed. In this movie he’s been reduced to just screaming while he uses his optic blast.

The Danger Room was a nice touch, too bad it came at the end of the movie. It should actually be used to show team building and training. Speaking of which, that Danger Room fight in X3 was the best part of that movie.

The post credits scene with Essex Corp hints at Mr. Sinister and possibly X-23. It’s not terribly exciting, as Sinister’s origin is tied to Apocalypse, as well as Cable– it’s all terribly complicated. If this is the direction they’re going, I hope they can simplify their stories.

Evan Peters' QuickSilver was the most fun part about the movie. QuickSilver is a good example of how they can have fun with characters and their powers. On top of that, he’s is actually more powerful than what I’ve seen in the comics. It’s interesting that Peters and Aaron Taylor-Johnson were both in Kick Ass, and they both play QuickSilver for different studios. 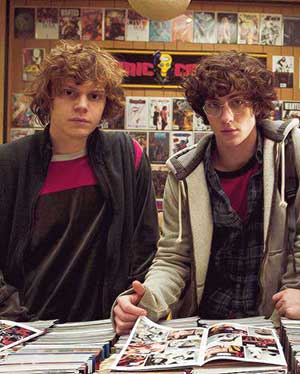 There have been nine X-Men movies thus far, and I’m being generous and counting Deadpool as one of them. Just looking at the movie posters, you can see that six out of the nine have Wolverine in them. The franchise is more like Wolverine and the X-Men.

X-Men 2 (2003) is better than the first, but also does not stand the test of time. It falls into the trap of centering around Wolverine once again.

X-Men: The Last Stand (2006) is the worst movie of them all. It got Jean Grey’s Phoenix as well as all the characters wrong. It basically spat in the face of the movie and comic fans. I choose to ignore this movie as ever existing.

X-Men Origins: Wolverine (2009), despite it’s name, was a missed opportunity to tell Wolverine’s origin. This movie should have taken place in the past over many decades. The montage of the many wars Wolverine and Sabertooth fought in was the best part of the movie. And of course they got Ryan Reynold’s Deadpool completely wrong.

X-Men: First Class (2011) is probably the best X-Men movie to date. It was a fresh reboot that didn’t focus on Wolverine or other popular characters for once. It touched upon why humanity would be afraid of mutants– one of the core story elements to the comics! They gave a good origins story for Professor X and Magneto. The best part was that they recruited and trained young mutants along with team building, and gave a compelling reason for why mutants would join the antagonist, Sebastian Shaw. A solid movie all around.

The Wolverine (2013) was very boring movie. How is Wolverine unable to beat a bunch of ninjas?

X-Men: Days of Future Past (2014) was just okay at best. They centered the movie on the big Hollywood stars, Hugh Jackman and Jennifer Lawrence. The Sentinels looked awful and instead of breaking away from the old cast, they brought them back! At least this movie undid X3.

Deadpool (2015) is not really an X-Men film, but I enjoyed a proper introduction of Deadpool into the X-Men universe. Their portrayal of Colossus was spot on and showed how you can really have fun with characters with power. 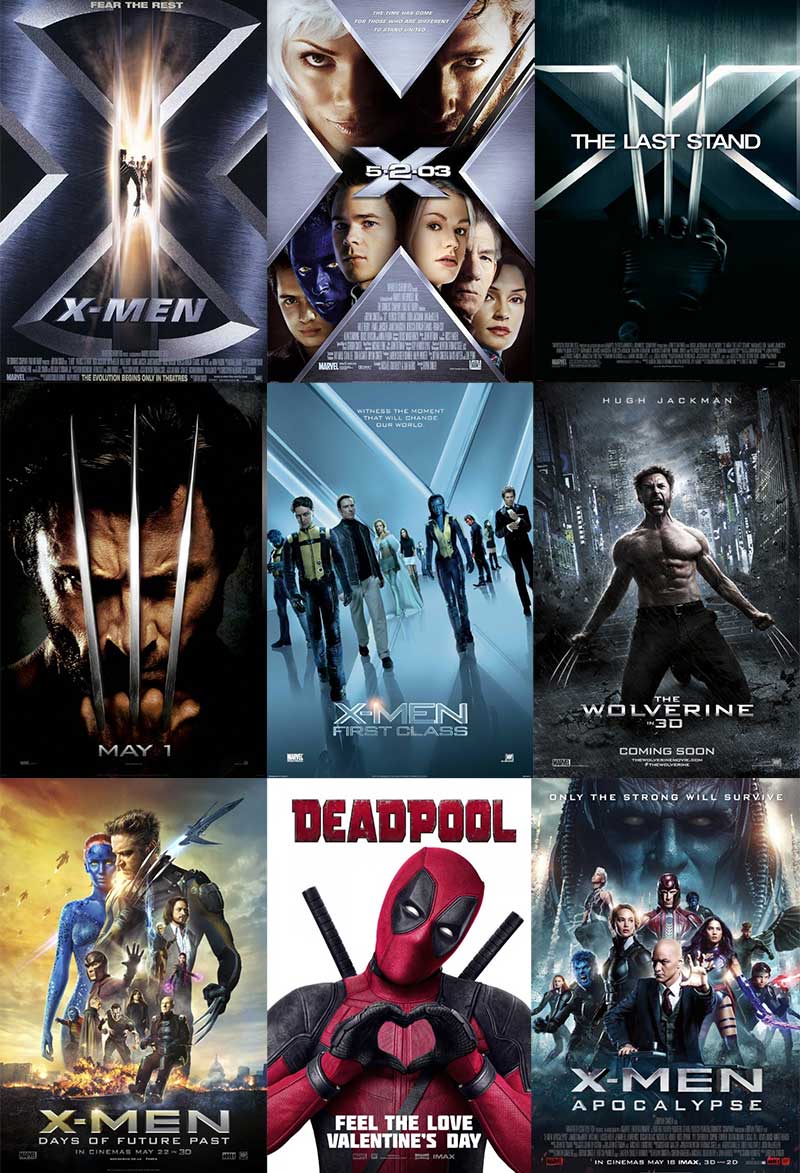 If you want to understand and appreciate the history of the X-Men more, check out the video documentary series by Comicbookgirl 19.

An X-Men television show would be a better medium than movies.

I remember when the Heroes TV series came out and was really excited. It was a show about individuals with special powers and how they deal with it spread across an entire season. It was a huge hit until season 2, when the writing quality just went downhill.

I can imagine an X-Men show being about mutants discovering their ability and being recruited to the Xavier School for Gifted Youngsters. There they are taught how to use their powers to find others, solve problems, and common things that you can parallel between those in real life that feel discriminated against or left out. Stories don’t have to be about the end of the world every time!

The problem with movie medium is that it always seems to have to be about a big catastrophic event. The best storytelling and character building should be around everyday things. Plus I don’t see a reason why they can’t do both, movie and TV. The X-Men universe is big enough that they could.

I’d love to see a show about heroes with powers done right!

I’d like the X-Men franchise to reboot, minus what we’ve seen in Deadpool. Get Bryan Singer out and bring in a new director with a better vision. There’s a lot of continuity problems, yet he wants to reunite the old cast in a future movie. There are other mutants besides Wolverine, Cyclops, Jean Grey, Storm, Professor X, and Magneto. That’s what made First Class great, it broke away from the same core movie X-Men. Singer also really likes blowing up mansions and destroying bridges. The imagery and CG is over used and has become a joke now.

I have no idea how they will ever do the Phoenix story line. It’s complex and involves alien races beyond the scope of Earth. It require a grown up Jean Grey and Scott Summers with a mature relationship.

Until things change, I will consider the X-Men franchise like the Transformers series, a money grab for studio executives that care very little for the source material. I’m sure many fans will continue to support and enjoy the X-Men movies, and that’s fine. I for one will not pay to watch crappy movies.