This year (2016), is looking to be an amazing year for comic book and superhero fans. There are so many movies coming out from both Marvel and DC that it’s a stark reminder how great it is to be a fan. Don’t worry, this post is spoiler free for both the movies (since I haven’t seen them nor have they come out yet) and the source materials, the comics.

Civil War is perhaps one of the greatest stories that Marvel can tell as part of the Marvel Cinematic Universe (MCU). As you can see in the trailer, it deals with heroes versus heroes. What team are you going to be on, team Iron Man or team Cap? There are so many characters in this movie it seems like an Avengers 2.5.

What you might know from the Civil War comic– which I’m hoping they follow the same theme from, is that it’s incredibly relevant in today’s world. What is freedom, how much government oversight should there be, what accountability should there be?

Deadpool has a large fan following. When I go to conventions he’s one of the most cosplayed characters on the floor. Most people outside the comic book community wouldn’t even know who Deadpool is, and I think that’s a great thing because they are in a for a treat. The timing for this movie couldn’t be better as there are so many super hero movies out now, and the Deadpoool is a hero/villain that doesn’t take things seriously at all and pokes fun of everything and is known to break the fourth wall. If you haven’t already, check out the trailer. The marketing team behind this is also pretty amazing– thus why I picked the banner above, hint hint, it’s not a romance and very R-rated.

I’m hoping that 20th Century Fox gets this movie right and stays true to the source material. Ryan Reynolds is reprising his role as Wade Wilson after the horribly done, Wolverine: Origins, where they completely butchered the character. I agree with Emergency Awesome, Reynolds' Deadpool is going to be the new Hugh Jackman’s Wolverine, see his videos here and here. He should be the new lead character for the movies that Fox will build movies around.

Dr. Strange is going to be an important movie that swings the doors open to a bigger stories in the Marvel Cinematic Universe– especially in the upcoming Avengers: Infinity Wars movies. I’m expecting this movie to be like Guardians of the Galaxy performed in 2014– a movie that no one had high expectations for and knew nothing about, but proved to be a great movie and story. Sorry no trailer or official posters out yet for this.

Also, Benedict Cumberbatch is cast as the master of mystic arts. He’s wonderful in everything, especially Sherlock.

Batman v Superman is a big deal for me because I want to see Wonder Woman (WW) make her appearance on the big screen after all these years. Many were critical of Gal Gadot’s size when they announced her as WW, but I think she looks amazing. I even tweeted in her defense. I won’t spoil it for you readers, but I’m hoping they take the New 52 take on Wonder Woman’s origin– it’s so much more interesting than what most people know.

I wrote a review on Man of Steel a few years ago where I said that the more I watched the movie, the less I liked it. That’s still true today, but I’m willing to give Zack Snyder creative leeway with the DC universe storytelling. Sure his movies are dark and gritty, but the action sequences are really fun!

I must also say that their trailers 1. shows too much of the story and 2. releases too many, too often. A trailer should just be an appetizer for what’s to come, not outline what’s to come act by act. I still believe in the movie going experience with going in without having too much knowledge of what I’m going to see. That said, here’s the trailer anyway. If you view it, you would see that there’s a lot going on in the movie, so it has me worried that the movie will seem rushed and forget to tell any sort of story or build intrigue. 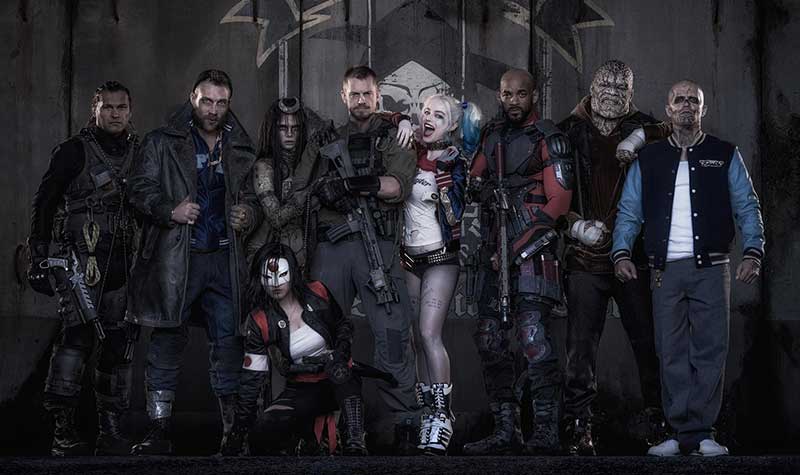 Suicide Squad continues to pave the way for a darker DC movie universe. To be honest, I’m interested in only two characters from the team: Joker and Harley Quinn. We’ve seen so many incarnations of Joker (Cesar Romero, Jack Nicholson, Mark Hamill (voice), and Heath Ledger). I want to see the Joker version that teams up with Harley Quinn on the big screen. Check out the trailer.

Like BvS, this movie also carries a lot of characters, all of which will likely be shown for the first time. Are the characters origins going to be rushed or non-existant? I have a feeling it’s just going to be an action packed movie of baddies with little to no story.

X-Men: Apocalypse is sadly not a movie I’m looking forward to. From what I’ve seen from the trailer, set photos, and 20th Century Fox’s track record of butchering Marvel characters, I don’t have much faith that they will do the characters justice. This is why it’s at the bottom of my list– my prediction is that it’s going to be a miss amongst hardcore fans as well as general audience. I just hope it’s not as bad as The Last Stand.

Fox’s X-Men franchise is in need of a reboot. I thank them for doing the first two X-Men movies, and First Class. However, Days of Future Past didn’t live up to my expectation and was just ‘okay’, not great. I’m curious how they plan to wrap up Jennifer Lawrence and Hugh Jackman’s big star leads for their movies.

Here’s a calendar with the movies marked on it. I really like how the movies are generally spread out, plenty of breathing room. 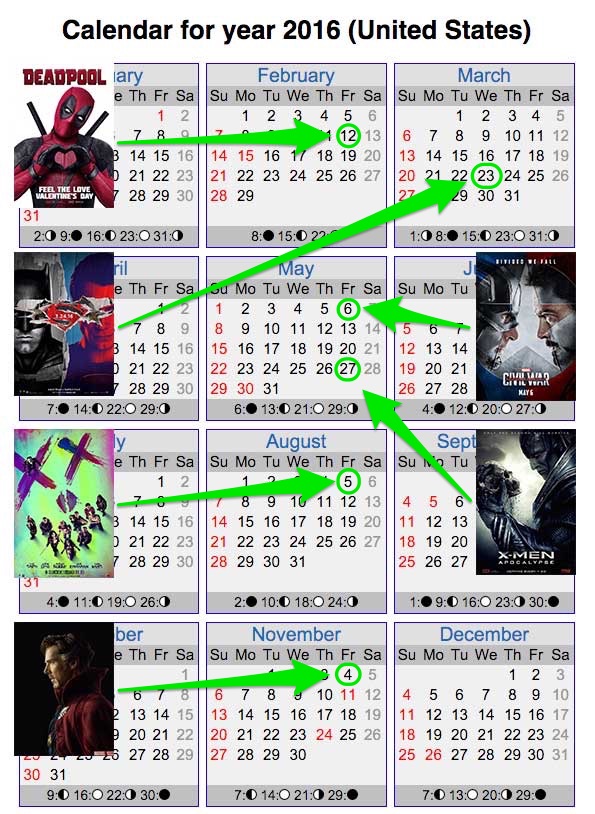 I’m very much looking forward to viewing most super hero movies this year. Marvel has done an amazing job building out their cinematic universe and DC is attempting to catch up by throwing together a Justice League team in a very short time. I think what Marvel has been doing for years is paying off because they’ve been telling great cinematic stories for years now.

My concern is that DC is making the mistakes that Marvel made years ago by diluting their properties between movies and TV shows without an grand scheme other than maybe a multi-verse view of things. For instance, I can watch all the Marvel TV shows (Agents of SHIELD, Agent Carter, Daredevil, Jessica Jones) because not only are they well done, but they tie right back into the MCU, they matter. But I can’t for the life of me enjoy DC Shows (The Flash, Arrow, Legends of Tomorrow, Gotham, or Supergirl) because the shows are very CW, geared towards teens and young adults– I’m just not in their demographic. That the world described is so different than what’s in the movies.

But maybe DC needs to make those mistakes in order for them to correct it and make things right. Not that Marvel has everything great now either– just look at how Fantastic Four, X-Men, Deadpool, etc. all within the disastrous grips of 20th Century Fox. Only recently did Marvel strike a deal with Sony to get some creative control of Spiderman back into the MCU.

This all being said, I’m still very grateful that all these comics are being turned into movies. The big screen is such an amazing place for story-telling and it’s what I consider a better medium than comics themselves. If comics is considered sequential art, so then are movies, but with sound.