A couple nights ago I was in downtown Chicago for a meetup at Chicago Ruby. Since I found cheap parking via Parking Panda, I figured afterwards I would spend a little time taking some photos of the famous Chicago Theatre.

The challenge of taking the photo at this location at night was that there’s a lot of people and cars moving or idling on both sides of the street. On top of that, to my left was a camera crew filming what I assume to be something for either a TV show or commercial. So besides patience, I had to do some problem solving to try to get a nice clear shot of the building.

I decided to abandon any HDR, aperture-priority, and shutter-priority modes/techniques. The only thing I’ve done before that I like is bulb mode with a remote shutter release, and of course a tripod.

The advantages of using a cable release and bulb mode are:

So with bulb mode, it’s already going to be a long exposure as we’re talking about the 8 to 15 second range for long the shutter stays open. How did I come up with those numbers? I start with a low number– say 5 seconds, and just start from there and increase it bit by bit after viewing the results on the LCD. I found the sweet spot to be in the 10-15 second range for this situation.

Because it’s a long exposure, the people walking on the sidewalk and across the street for the most part don’t clutter up the image. They are mostly invisible to the camera. The head/tail lights of cars do leave a streak of light– which is how timing when you start/stop with the remote cable comes into play. For my shots, I prefer not to have too many cars coming across my composition. Either one side of the street or the other is what I think is okay, but not both. I want the main focus to be the building and sign, not how much light streak I can get on the street.

Other settings I set was an ISO of 100, and an aperture of f/22. And these are just personal preferences– as I like to get as much detail as possible. But in general for these kind of cityscape shots, you want a low ISO number, and a high aperture number (but many will say a small aperture since it corresponds to a smaller opening to allow light in).

So after some editing in Adobe Lightroom, I got the image below. 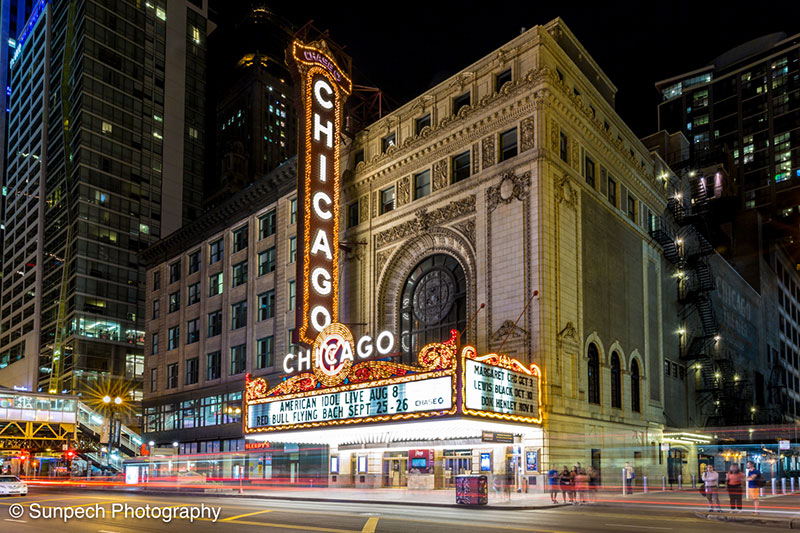 I’m pretty happy with the shot, but I would love to revisit this location. This was my first time there and I only came when it was very dark already around 9pm. I’d love to visit when there’s some color in the sky, but the trade off would be that there would be even more people and cars.

Here’s a list of the gear I used. I want to note that I did have my Canon 16-35mm lens with me, but I found that during post-processing it distorted straight lines (buildings really) too much for the crop I wanted.

Where to Purchase my Photo

I have the photo available at: