Last week I was in the Bahamas for a friend’s wedding. The people, the scenery, and weather was beautiful up and through the wedding. The day after… not so much. We had a bit of a tropical storm, but it didn’t last too long. Thank goodness the wedding day had clear skies.

Naturally, I brought my camera with me on the trip. I do have a post on what’s in my camera bag, typically. I knew they had their own photographer(s) for the weekend, so I wanted to share with everyone how you can be considerate of photographers at events.

Get out of their way

If it’s an event such as a wedding, stay out of their way. I mean this physically, don’t be in front of their shot. Give the photographers priority to get their shots. They are professionals being paid to do their job. Likely you’re just a guest to attend the event, it’s not your place to get the absolute best shot at the expense of the bride and groom’s photographers.

Minimize use of flash

The room isn’t well lit. Maybe you think it’s time for you to switch from auto flash to always use flash. Maybe you want to start taking photos willy-nilly– as in all the time now that the big ceremony is over. WRONG. A constant use of flashes can actually be captured by other cameras in the area– possibly ruining a good photo by some awkward light source. So be prudent as to how many shots with flashes you use. I’m not saying don’t ever use flash. Prudence.

Do not just stand there

There may be a time for that group photo where on one side is the group, the subject, and on the other is everyone with a camera(s). So you’re there on the side with everyone with a camera. After you take your shot and you’re done, leave. By standing there reviewing your photo(s), you’re eating up space that someone else could be in your spot to take a photo.

Same situation as above with a group photo. It’s so annoying to look at your finished group photo of eight people, where everyone but two people are looking directly at your camera. Instead, these few people are looking at someone else’s. It’s not the subjects' fault either, they don’t know where to look! Everyone firing off shots all at once benefits no one. Take turns, call out which one the group should be looking at so they know. Then call out when everyone should be looking at yours when it’s your turn.

During a beach photoshoot, the photographer rounded everyone up. And I do mean everyone– all 120+ wedding guests for a big group shot on the beach. When the different groups were taking turns, some of us wanted to also take pictures of the group. The lead photographer wouldn’t have that. He basically shooed us away so he could get his shot.

At first I wasn’t too pleased that I couldn’t also get my shot. But I understood. I needed to get out of his way and let him do his job. I was able to sneak in some candid, behind the scene shots that turned out fine.

Okay, rant over. Sharing time. One photo only though, I like to keep this wedding album private out of respect of the bride/groom.

Here is a shot of the gazebo before the wedding. This is one of my favorite shots I took in the Bahamas. 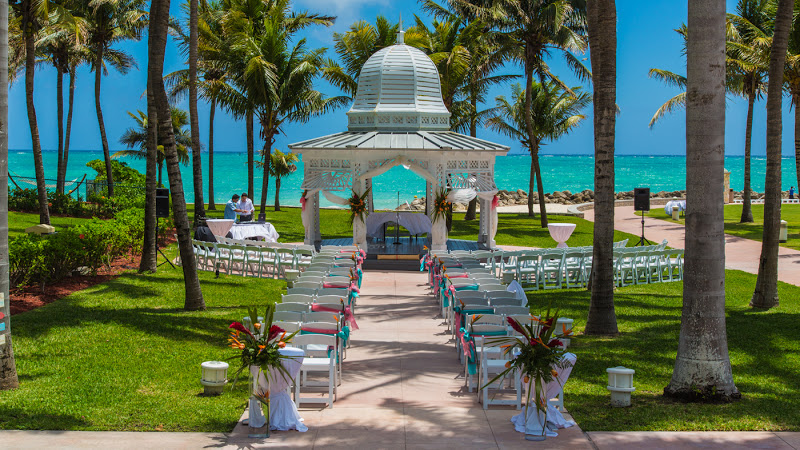