I’ve become a Meetup Junkie. Every month I attend several meetups related to technology and food. I can’t seem to get enough of following these interests with other like-minded individuals, in the real world.

I primarily use Meetup to find interesting groups by city. I’ve used it in Chicago, Bangkok, San Francisco, and now Los Angeles. It’s fantastic and addicting!

But for those who haven’t used such a service, it may be somewhat scary– especially if you are an introvert. What it initially amounts to is walking into a place and/or crowd, not knowing anyone or what kind of event it could be. I mean, yes, there will probably be a kind of theme/topic such as Ruby or Startups. But if you are walking in by yourself, without a friend or co-worker, you probably won’t know anyone. And that can be a little intimidating. I still find it a little intimidating.

However, the lovely thing about meetups, is that a lot of people are walking in like that. Many want to be social. Many are passionate about the topic at hand, and want to talk about it. That’s really the upshot of it. Of course that doesn’t mean everyone is friendly and talkative. In fact there are meetups I’ve been meaning to remove off my schedule just because it didn’t meet my expectation or it’s simply not for me. 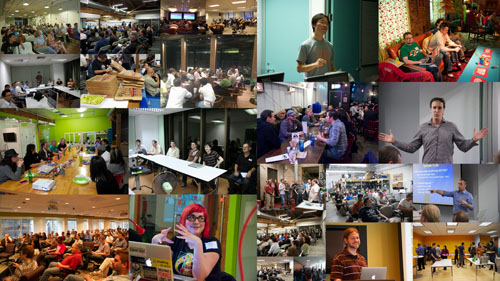 I’ve been using services such as Meetup and Eventbrite since 2009/2010, give or take a few months. I find these services fills a gap that exists between social networks and the real world. It’s interesting how social networks such as Facebook, Twitter, and G+ allow us to be “social” in the virtual sense, but rarely connect people in the real world. Evite had their chance at this and blew it.

Meetup.com stands above the rest. It doesn’t have an entry-point where users need to have a social network to start using their service. Example– Facebook requires you to have several friends to make the site useful. And even then, your connections may not have the same interests as you do, say about photography. Which leaves a gap between you, your interests, and the real world. Same things can be said about Twitter.

Anyhoo, if you do happen to see me at a meetup in your respective city, please do say hello!