To my recollection, I’ve only ever participated in a Black Friday event back in 2006. And it was really really tough. In a nutshell, I went shopping at midnight, went home to nap, then went out again to shop during the day, totally 15 some hours of shopping by day’s end. It’s something that I hope to never do again in my life. (Note: I only did this because some girls wanted to do some shopping).

The point I wanted to make, is that Black Friday is stupid and represents some of the things that’s wrong with this country (USA). The following article on Gizmodo really sums it up: 10 Reasons We’re Doomed: Black Friday Edition 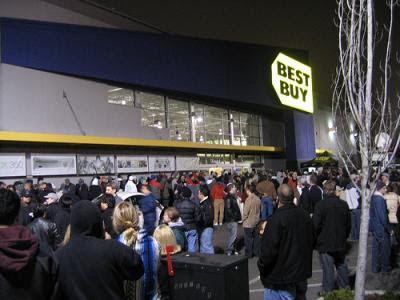 What’s stupid about it is how so many people camp outside the stores, lining up in the cold weather, to buy crap they don’t really need. Like yesterday, I heard on the radio that some people have been camping outside Best Buy (BB) for 5 days. When a man was asked by the reporter what he was planning to buy, the fool replied that he did not know.

So this guy set up a tent outside of BB, for over 100 hours, to wait for some deals on merchandise he doesn’t even know he’ll want? It seems more like people in general will want it, after they see how much they’re “saving” from the sale.

I can understand it a little more if someone were to do the research for an item(s) he/she wants in particular, and then going shopping that day at the exact store that’s selling it. With this information age, it’s not hard to find our who’s having what deals and where. But to go out and spend money on stuff you don’t know you’ll even need/want, is just crazy.

For me, this year, I did my shopping online. I knew what I wanted to get. No lines. No cold weather. No crazy shoppers to deal with. No hassle.

And now I can add, dangerous and potentially life-threatening to your health/well-being: